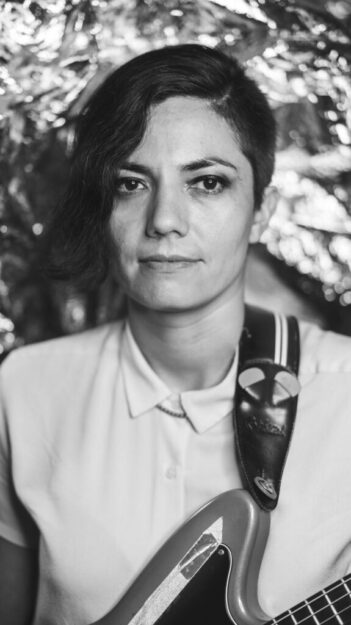 AVA MENDOZA is a Brooklyn-based guitarist, singer, songwriter and composer. Born in 1983, she started performing her own music, and as a sidewoman and collaborator in many different projects, as soon as she was legally allowed into venues. As a guitarist, Mendoza has received acclaim for her technique and viscerality. Her most ongoing work is as leader of art rock band Unnatural Ways, and as a solo performer of her own music and works by contemporary composers. In any context she is committed to bringing expressivity, energy and a wide sonic range to the music. Mendoza has toured throughout the U.S. and Europe and recorded/performed with musicians including Carla Bozulich, Malcolm Mooney (CAN), Steve Shelley, Mike Watt, Adele Bertei, Mick Barr, William Hooker, Nels Cline, Matana Roberts, John Zorn, Jamaaladeen Tacuma, Fred Frith, William Parker, Hamid Drake, Object Collection (Travis Just), ROVA, Negativland, the Violent Femmes, and members of Caroliner. She has received composition commissions from film distributor Kino Lorber, new music duo The Living Earth Show, the Jazz Coalition, and John Zorn’s Stone Commissioning Series at National Sawdust. Recordings are available on labels Tzadik, Astral Spirits, SGG, Pyroclastic, Clean Feed, Resipiscent, and New Atlantis.

“A wizard on a semi-circle of effects pedals, but… equally adept with FX-less technique,” (Lars Gotrich, NPR).

“Mendoza plays these songs. She makes them sing. Her technique is impeccable, but her playing is astonishingly expressive. She doesn’t just bend blue notes; she wads them up into a ball and throws them up against a wall… Mendoza knows what she does better than almost anyone else on the planet, which is tell stories with her guitar.” (Aiding & Abetting).

“Ava Mendoza creates edgy, challenging music. She plays guitar and stompboxes and, no, she doesn’t use pedals to mask inferior technique or shoddy ideas. Her command of the instrument is prodigious, her tonal palette is expansive, she has an intuitive improvisatory awareness, and her lunchbox is chockfull of sonic goodies. Not staid or vanilla, her playing is a profound testament to the state of contemporary guitar. Mendoza has deep roots, too, and that includes years of classical training, a rich knowledge of old-school blues and traditional fingerstyle, a profound awareness of no-wave punk and sonic weirdness, and significant exposure to the free jazz masters. She also has the ears and chops to assimilate her disparate influences and execute difficult music. Not an easy feat.” (Tzvi Gluckin, Premier Guitar)

She was featured as one of Guitar World‘s “10 Female Guitarists You Should Know”.